BROOKE’S POINT, Palawan — Several groups of farmers, women, and youth held a protest rally here Saturday morning in the Ipilan Nickel Corporation (INC) mine site in Barangay Maasin to appeal to Malacañang not to renew its permits to operate.

Rally organizer Rudy Cataluña said they are appealing to President Rodrigo Duterte to stop Ipilan mining from further destroying the environment of their town because of its abuse.

He said Ipilan has also been notorious in violating the rights of the indigenous peoples (IPs) and for continuously operating illegally within more than a hundred hectares of land where there are primary forests.

Cataluña said they used to harvest more than 200 bags of palay per hectare in their farms, but due to the operation of Ipilan, they are only able to produce 20 bags in recent times.

Some 20 Ipilan security guards tried to prevent the protesters at first from advancing through their barriers around 10 a.m. but failed when Brooke’s Point mayor Mary Jean Feliciano arrived to join.

The protesters were able to get rid of the barbed wire barricades, as well as other roadblocks, to enter the mine site

Feliciano said Ipilan’s audacity to continue operating in Brooke’s Point without authority from concerned government agencies is a rude and disrespectful behavior that should be stopped so other mining companies will not take after it.

She said what Ipilan is doing is already “above the law”.

The protest was also attended by representatives from the Alyansa Tigil Mina ng Pilipinas, a coalition that challenges the promotion of large-scale mining in the country.

Meloy Maño of the coalition said they are in the protest rally to support Brooke’s Point’s fight against the continuous operation of Ipilan that poses a threat to the ecology.

Maño said the newly-formed Samahang Magsasaka Ayaw sa Pagmimina (SMAP) will continue to do its best to drive out Ipilan from their town.

Before the protest rally ended, the SMAP put up its own guard post outside the gate of Ipilan mining. 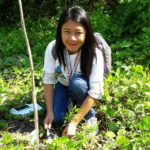